Prototyping is defined as the process of developing a working replication of a product or system that has to be engineered. It offers a small scale facsimile of the end product and is used for obtaining customer feedback as described below:

The Prototyping Model is one of the most popularly used Software Development Life Cycle Models (SDLC models). This model is used when the customers do not know the exact project requirements beforehand. In this model, a prototype of the end product is first developed, tested and refined as per customer feedback repeatedly till a final acceptable prototype is achieved which forms the basis for developing the final product.

In this process model, the system is partially implemented before or during the analysis phase thereby giving the customers an opportunity to see the product early in the life cycle. The process starts by interviewing the customers and developing the incomplete high-level paper model. This document is used to build the initial prototype supporting only the basic functionality as desired by the customer. Once the customer figures out the problems, the prototype is further refined to eliminate them. The process continues until the user approves the prototype and finds the working model to be satisfactory.

There are four types of models available:

A) Rapid Throwaway Prototyping –
This technique offers a useful method of exploring ideas and getting customer feedback for each of them. In this method, a developed prototype need not necessarily be a part of the ultimately accepted prototype. Customer feedback helps in preventing unnecessary design faults and hence, the final prototype developed is of better quality.

B) Evolutionary Prototyping –
In this method, the prototype developed initially is incrementally refined on the basis of customer feedback till it finally gets accepted. In comparison to Rapid Throwaway Prototyping, it offers a better approach which saves time as well as effort. This is because developing a prototype from scratch for every iteration of the process can sometimes be very frustrating for the developers.

C) Incremental Prototyping – In this type of incremental Prototyping, the final expected product is broken into different small pieces of prototypes and being developed individually. In the end, when all individual pieces are properly developed, then the different prototypes are collectively merged into a single final product in their predefined order. It’s a very efficient approach that reduces the complexity of the development process, where the goal is divided into sub-parts and each sub-part is developed individually. The time interval between the project’s beginning and final delivery is substantially reduced because all parts of the system are prototyped and tested simultaneously. Of course, there might be the possibility that the pieces just do not fit together due to some lack of ness in the development phase – this can only be fixed by careful and complete plotting of the entire system before prototyping starts.

D) Extreme Prototyping – This method is mainly used for web development. It is consists of three sequential independent phases:

D.1) In this phase a basic prototype with all the existing static pages are presented in the HTML format.

D.2)  In the 2nd phase, Functional screens are made with a simulated data process using a prototype services layer.

D.3) This is the final step where all the services are implemented and associated with the final prototype.

This Extreme Prototyping method makes the project cycling and delivery robust and fast, and keeps the entire developer team focus centralized on products deliveries rather than discovering all possible needs and specifications and adding unnecessitated features. 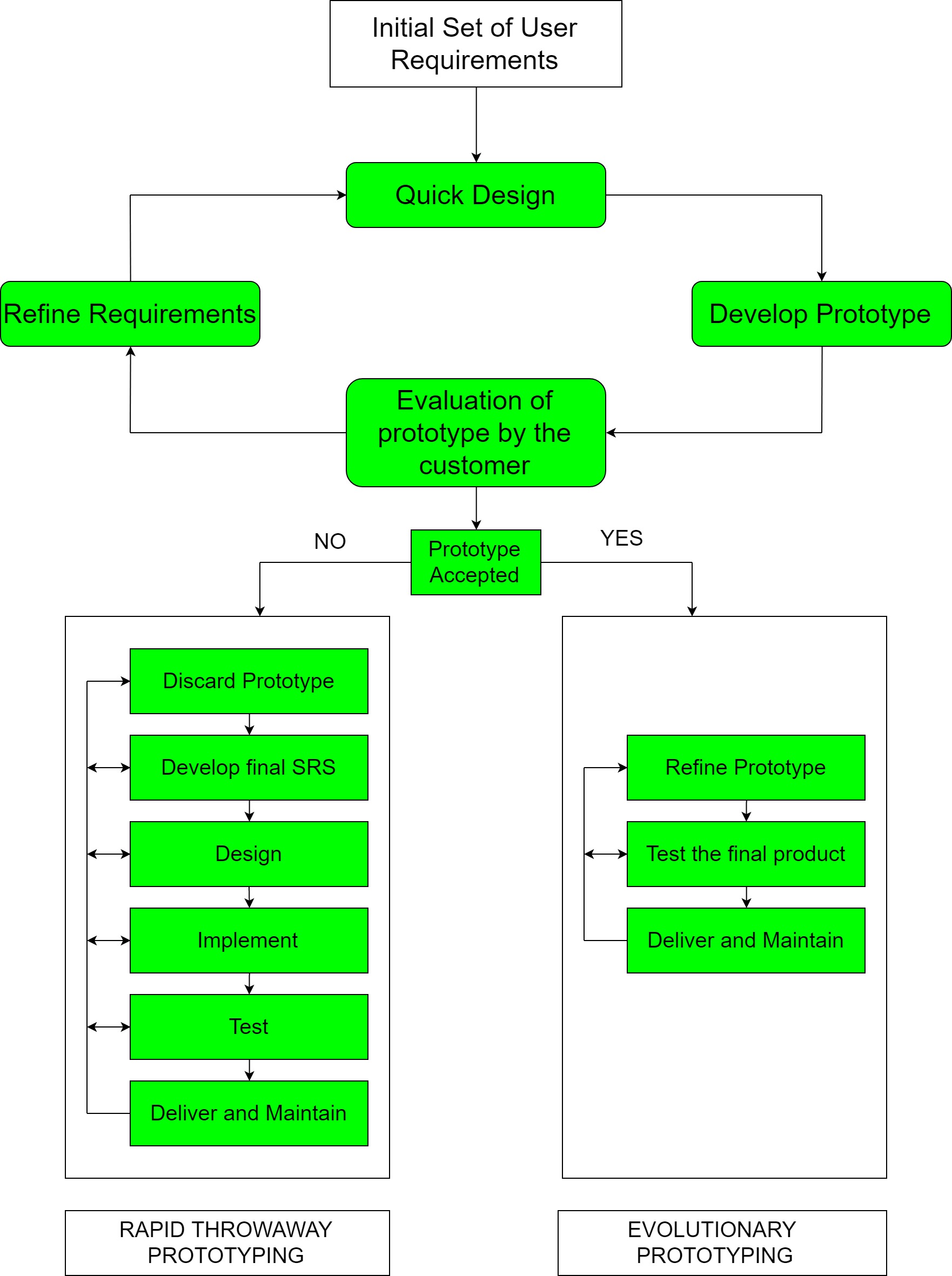 Use –
The Prototyping Model should be used when the requirements of the product are not clearly understood or are unstable. It can also be used if requirements are changing quickly. This model can be successfully used for developing user interfaces, high technology software-intensive systems, and systems with complex algorithms and interfaces. It is also a very good choice to demonstrate the technical feasibility of the product.
Read next: Classical Waterfall Model, Spiral Model, Iterative Model.